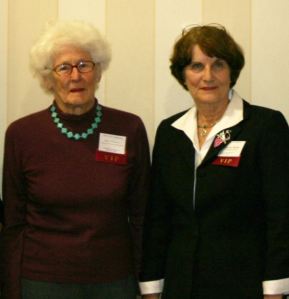 Founding VLF board member, Mary Peacock, and Founder of the VLF, former First Lady of Virginia, Jeannie P. Baliles, in 2010.

Jeannie McPherson Patterson Baliles was born in North Carolina and raised near Baltimore. She took her undergraduate and graduate degrees in history from Washington College and Wesleyan University. She taught history until the birth of her first child, and then stayed home to raise her children, Laura and Jonathan.

When she became First Lady of Virginia in 1986, she immediately named fighting illiteracy as a major project she would undertake. That same year, she oversaw the founding of the Virginia Literacy Foundation and has served as its chair ever since. It was Jeannie’s vision to create a public-private partnership that would oversee and prevent overlapping services among all community-based literacy organizations throughout the state. The Foundation also partnered with the State Department of Education in the Virginia Literacy Initiative to encourage the spread of family and workplace literacy programs in the commonwealth. This model was unprecedented in the nation, and 20 years later, she is still the active chair of the organization, which has seen the community-based literacy organizations it supports flourish, along with the adults and families they have served and the communities in which they operate.

Read a letter from Jeannie Baliles, written for a Celebration of Words, November 2005 »